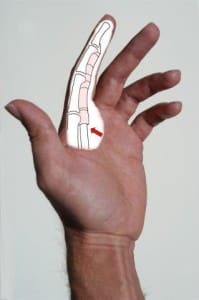 The flexor tendons to the fingers pass through a series of pulleys (collectively know as the flexor tendon sheath), starting at the base of each finger and extending to the most distal flexor crease. Trigger fingers result from swelling, inflammation, and/or cartilaginous metaplasia of the flexor tendon and the flexor tendon sheath at its opening at the base of the finger. This results in a size mismatch between the tendon and the sheath. Initially, this may present as pain at the base of the finger. As the condition worsens, catching or triggering of the finger may occur as the thickened portion of the tendon passes in and out of the sheath. In severe cases, the finger may become locked in a flexed position. Initial treatment consists of rest and NSAIDS such as ibuprofen or naproxen. If this is unsuccessful, a steroid injection can provide relief in up to 50% of nondiabetic patients. For patients that cannot be managed conservatively, trigger finger surgery has a very high success rate. Dr. Fremling has been performing trigger finger surgery for over 20 years. He utilizes a transverse incision to minimize scarring. In some cases, trigger finger surgery can be performed in the office under local anesthesia to minimize cost. Often patients are allowed to use their hand for light activities within 24-48 hours of trigger finger surgery.